Thompson and Nnamdi Asomugha’s chemistry is rivaled only by the mid-century fashion, hair, and cars on display 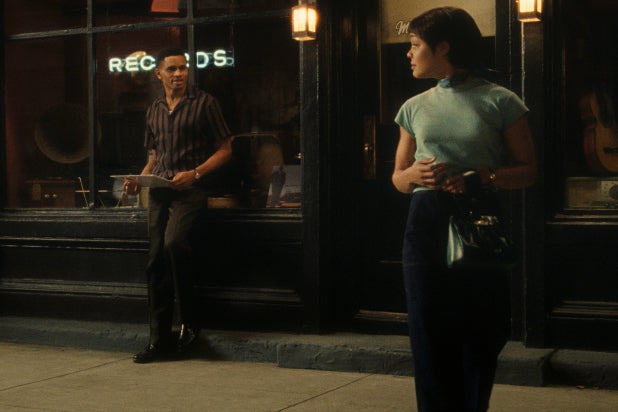 Whether or not it’s a result of the backlash against “La La Land” and its white-savior-of-jazz subplot, black filmmakers seem to be having a moment to reclaim jazz narratives for themselves, from Kemp Powers co-directing Pixar’s “Soul” to Eugene Ashe writing and directing “Sylvie’s Love,” a gorgeous new romance set against the backdrop of jazz and television, two of America’s most dominant artforms of the 1950s.

Ashe isn’t rewriting the love story, but he has steeped it with old-school glamour, making the kind of sumptuous saga of aching, star-crossed romance that Ross Hunter might have produced in his 1960s glory days if Hollywood had been ready to populate such a film with an all-Black cast. Between the scorching chemistry of leads Tessa Thompson and Nnamdi Asomugha and the glorious mid-century outfits, hair, décor and cars on display, “Sylvie’s Love” is a delectable valentine.

When Sylvie (Thompson) and Robert (Asomugha, “Crown Heights”) meet, she’s working in her father’s record store while awaiting her fiancé’s return from the Korean War, and he’s a jazz sax virtuoso from Detroit, spending the summer in New York playing with a quartet. He gets a day job at the record store, and the two bond over their shared love of music as well as their ambitions: Robert is clearly going places as a sax player, and Sylvie wants to become a TV executive.

Over the next decade, the course of their love hits the usual bumps — sacrifices made and not made, Sylvie marrying the fiancé even though she’s carring Robert’s child, career goals clashing with familial duties — but even as time and distance separate them, it’s clear that these two can’t escape each other’s orbits. And while both are proud and driven, it’s also apparent that, unlike the leads in Martin Scorsese’s similarly jazz-infused “New York, New York,” they have the capacity to meet in the middle.

If you’re the kind of viewer who tunes into “Mad Men” or “The Marvelous Mrs. Maisel” for the cigarette lighters and the neckties and the bathing suits and the light fixtures, “Sylvie’s Love” delivers big-time in that department; production designer Mayne Berke and costumer Phoenix Mellow create a dazzingly idealized take on the Eisenhower and Kennedy years, and the great cinematographer Declan Quinn (“Hamilton”) provides enough gloss to give the settings a nostalgic sheen without tipping into parody or turning living rooms into showrooms. The score by Fabrice Lecomte similarly dovetails in and out of period needle-drops with a delicacy that enhances the romantic storytelling.

NFL vet Asomugha, in his most substantial acting role to date, displays real screen magnetism, with the lanky confidence of a jazzman onstage giving way to the shy hesitation of a young man in love in his early scenes opposite Thompson. Her arc, meanwhile, takes her from sheltered young lady (Sylvie’s mother is Harlem’s strictest etiquette instructor) to confident career woman. They have memorable moments in separate scenes, but when they’re together, they create that indefinable spark that sears a screen pairing in the imagination.

They’re given the space to do so by Ashe, who clearly wants to depict a relationship between two Black people in this moment of U.S. history without forcing it to step aside for trauma or violence. It’s not that brutal structural and personal racism doesn’t exist in this world (Sylvie’s ad-exec husband gets a high-profile account only because his bigoted boss wants the NAACP off his firm’s back) but it’s more atmospheric than plot-propelling; these characters are in love, and romance is the message. This may be one of the only times someone in a film — in this case, Sylvie’s cousin Mona — announces their intention to go to the South to sign up voters, and it’s not a Chekhov’s gun for a later tragic incident.

The two exist in a world populated by memorable and eccentric people brought to life by a talented ensemble of character actors, including Lance Reddick as Sylvie’s father, Aja Naomi King as Mona, Wendi McClendon-Covey as a cooking-show host, and Eva Longoria as a musician’s wife who gets to perform a torrid rendition of “Quizás, Quizás, Quizás,” a song choice that indicates that Ashe watched “In the Mood for Love” once or twice before working on this movie.

Some of the misunderstandings along the way are a touch contrived, and “Sylvie’s Love” does flashback itself one time too many in its third act, but for the most part, this is an assured piece of filmmaking that will delight lovers of love stories, first-generation televisions, Coke in glass bottles, and all that jazz.