“I love Taskmaster so much,” Black Widow director Cate Shortland told ET of the mysterious masked antagonist whose identity serves as one of the movie’s biggest twists. “I hope that it remains a secret, because the character is so great, so scary, so cool, just such a great villain — and the reveal is good.”

Now that Black Widow is out, the secret is too: Taskmaster is Antonia Dreykov, daughter of the man who oversees the Black Widow-training Red Room and a character first mentioned back in 2012’s The Avengers. Antonia was thought to have died in the same explosion Natasha (Scarlett Johansson) intended to kill General Dreykov, but both survived and afterward, Dreykov implanted a chip in his daughter’s brain that grants her photographic reflexes capable of mimicking any fighting style.

It’s a new take on the character, who in the comics is Tony Masters, a mercenary boasting the same powerset. In a chat with ET, Olga Kurylenko, who plays Antonia, spoke about reinterpreting Taskmaster, the lengths she went to keep the secret and her future in the MCU.

I’m shocked that the Taskmaster reveal didn’t get leaked or spoiled, especially since the movie took an extra year to come out. How hard was it to keep secret?

Olga Kurylenko: Well, for me, I just threw it out of my mind. It was like, “OK, not an option. Forget about it.” Whenever it came up in conversation, I just had to use my acting skills and pretend like I have no idea. Like, “Oh yeah, that seems to be a cool film.” [Laughs] My mom didn’t know until two days ago. I didn’t tell her. When she told me, “Oh, I want to see that movie. It looks really cool,” I didn’t tell her I’m part of that. The thing is, it is extraordinary that we pulled it off. Frankly, I knew it had to be secret. I mean, I can only speak for myself and I knew that I would not say anything, but there were so many other people involved. I’m like, how does everyone keep silent? And everyone has. It’s extraordinary.

Did you tell your mom yourself? Or did you let her watch the movie and be surprised?

I should have, but you know what I figured? Unless she would have gone on the very first day — and she didn’t — the moment it came out, people were texting me. My friends were like, “Oh my God, just saw it, didn’t know you were in it!” I was getting all these texts, so I thought, Now someone else will tell her. And I thought in this case, I’d rather tell her myself. I figured that she will know it before she sees it, and I didn’t want it to come from anyone else so I told her.

How did she react?

She was like, “Really? Wow! But where?” She’s like, “But I looked online. Your name is not in the credits.” I was like, “Well, I know. It’s all part of it.” It was funny, because she didn’t know what the character looked like. And I got it on Disney+ for my son, because I wanted to show him certain moments — not the whole thing, because yeah — and he came to set once when I filmed it. So, he saw my costume and when the character appears, he’s like “That’s mommy! That’s mommy.” My mom was there and she said, “What? How do you know?” And he remembered. It was funny. He had no idea what the name of character was, because I never told him, but he did recognize the costume. He was like, “That’s mommy!” [Laughs]

Now that the secret is out, what has the reception been like?

So far, it’s cool. It’s always a surprise. People are like, “What?! I had no idea! I didn’t see this coming!” It seems to be going really well. It’s exciting after two years that we can finally see it and discuss it. That movie, I think, is so complex. It has so many messages in it, and there’s so much going on. And women are so strong in it. They’re just such fighters and so brave, and it’s really encouraging and empowering to see a movie like that. 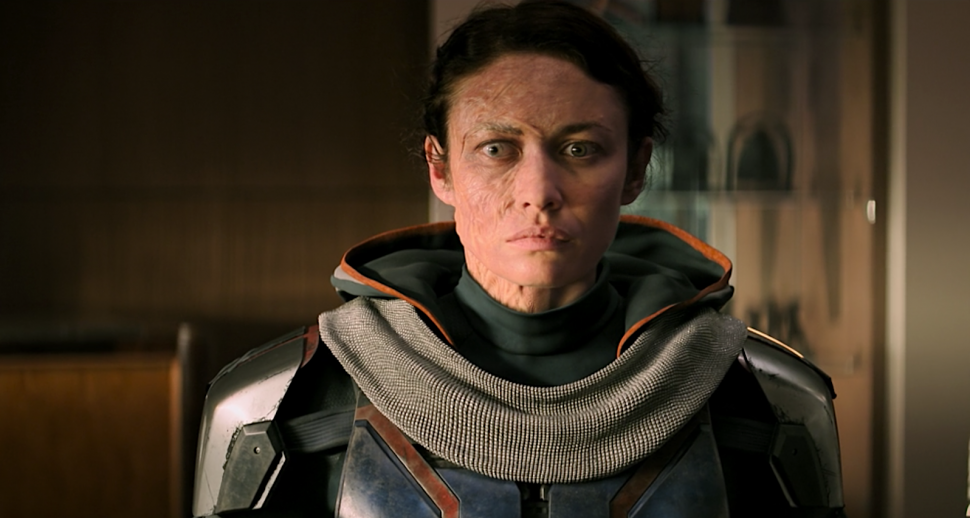