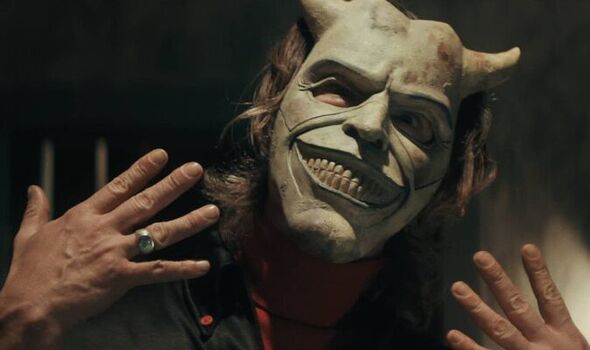 Although it’s an adaptation of a 2004 short story by Joe Hill (Stephen King’s son), it’s also a deeply personal film for Derrickson. Like its teenage hero Finney (an excellent Mason Thames), he grew up in a working-class neighbourhood in Denver in the 1970s.

He has spoken about a childhood blighted by violence, from parents as well as the kids in the neighbourhood, while the spectre of Colorado serial killer Ted Bundy loomed large.

Before Finney is imprisoned by Hawke’s masked child-snatcher The Grabber, Derrickson immerses us in the violent world of his resilient but understandably fearful hero.

At school, plucky Gwen acts as Finney’s protector from his feral classmates. Any expectations of fuzzy 70s nostalgia are upended early on by a shockingly gruesome playground fight.

The Grabber’s menace is more restrained, chillingly so. In one of the film’s most disturbing scenes, Finney awakens in a basement cell to find his captor watching him sleep.

The Grabber hides behind a series of demonic masks but the chills emanate from Hawke’s strangled voice.

The title refers to a disconnected rotary-dialled device which The Grabber hasn’t bothered to remove from Finney’s basement cell.

It turns out this is our hero’s tormentor and his salvation. Occasionally, the phone rings and Finney receives cryptic messages from the ghosts of the killer’s previous victims.

Recent Stephen King adaptations have suffered from disappointing endings but his son’s debut ends with a bang.

The clever script is assembled like a jigsaw puzzle and all the pieces come together with a very satisfying snap.