One of the breakout performances of 2019 comes from an actress who’s been in the business for more than 60 years. After starring in countless TV shows and movies in her native China, Zhao Shuzhen is poised to become a household name among indie filmgoers and awards voters with her supporting turn as a grandmother who doesn’t know she has cancer in Lulu Wang’s summer sleeper “The Farewell.”

“I’ve played women that are angry, very obsessive, mad women. I’ve played grandmothers who are very nice and warm and optimistic,” Shuzhen told IndieWire via a translator in a recent interview. That’s who she plays in “The Farewell,” a stand-in for director Wang’s own real-life grandmother — or Nai Nai, as they’re called in Chinese parlance — who, to this day, still doesn’t know she has cancer. Awkwafina leads the film as a version of Wang, seen throughout “The Farewell” as having a guilty conscience for participating in the elaborate lie her family constructed to protect Nai Nai (Shuzhen) from discovering her terminal illness.

“Lulu told me about the real story of her family, the level of hesitation they had, the lies, the deception they had to put on. Throughout that conversation, I could tell she had real love for her grandmother. That sense of love, familial bond she expressed, moved me very deeply,” Shuzhen said. Wang first pproached Shuzhen with a script originally titled “Nai Nai,” via Shuzhen’s friend, actress Diana Lin, who plays Awkwafina’s mother in “The Farewell.”

This delicate ruse is not uncommon in China, according to Shuzhen. “In China, cancer is considered such a serious illness, it’s such a big deal that a lot of people, once they find out they have cancer, their bodies start deteriorating at a much faster rate because they are weighed down by the emotional burden of the idea,” Shuzhen said. “In China, they try to maintain some kind of secrecy. The only reason is because they want to make sure the person still lives a happy and carefree life, and that their condition does not get worse. Even the fact that Lulu’s grandmother doesn’t know about her illness, the fact that she has now lived as long as she has, I consider a miracle.”

Shuzhen also said that it’s typical of children with ailing parents and grandparents to create distraction tactics to keep up appearances and maintain quality of life for their loved ones. “Children will take them out vacationing to America or Europe. They will go on trips, just to get their mind off anything to do with illness,” Shuzhen said. “Chinese people think of this as a form of psychological treatment. It may not be healing your body, but they want you to be happy. Most senior citizens that I know just do what they’re children tell them.” 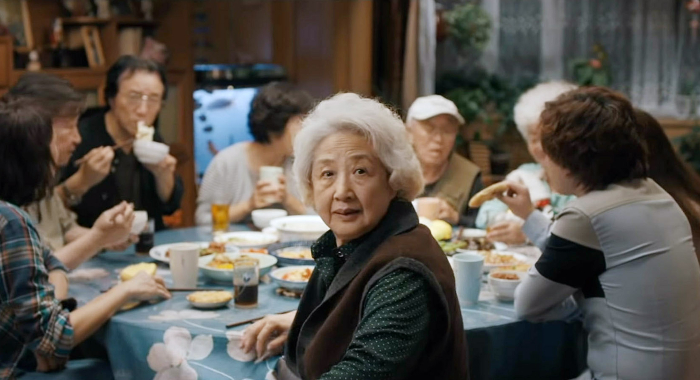 Because “The Farewell” has yet to come out in China — Wang said the Chinese distributor is eyeing a spring release, spurred by the film’s success in the U.S. — her grandmother still hasn’t seen the film nor does she fully know what it’s about. “It seemed clear to her that the film was about my family. We had to tell her this was loosely based on our family, so she knew Zhao was playing her but didn’t necessarily know that Zhao is the main character,” Lulu Wang said as the production got underway.

Wang facilitated a meeting in China between Shuzhen and her grandmother, albeit under the pretense of a personal visit from a beloved screen actress whom her grandmother already knew and adored. “I couldn’t control the flow of information. I wasn’t sure who told who what,” Wang said. (IndieWire’s Anne Thompson recently sat down with Wang to discuss her memoir movie here.)

Of her meeting with Wang’s grandmother, Shuzhen said, “At the time I could sense she’s a very warm person, very fierce and optimistic. She gave me gifts and treated me like family and was so energetic and so full of life that you could not tell she has any kind of illness, period.”

Shuzhen said that throughout production, the cast and crew had to be very careful to maintain secrecy in order to keep Wang’s grandmother in the dark. “While this process was unfolding, she was constantly reminding us, ‘Don’t leak this.’ I imagine once the movie comes out, she will have to find some kind of way to still put up this front,” Shuzhen said.

As for what the plan is once the movie opens in China and Wang’s grandmother finally sees it, Wang said, “That’s a long thing that I am still dealing with, with my family, and whether or not we will keep the secret is up in the air, because we want to show her the movie.”