The Masked Singer is down to this season’s “Spicy Six,” and what a deep well of vocal talent is bubbling underneath those egregiously large costume heads! Dare I say that this season’s final six contestants are even stronger than Season 4’s highly impressive mix (which, if you’ve forgotten, was Tori Kelly, Aloe Blacc, LeAnn Rimes, Nick Carter, Taylor Dayne and Chloe Kim)?

See if you agree as we recap the evening’s performances:

YETI | I do not understand how Yeti moved so easily and agilely in his costume as he performed Rob Base & DJ EZ Rock’s “It Takes Two,” but I very much enjoyed watching — and listening to — him do so. Clues included: a mention of being a father, five ice cream cones, a reference to one of his children being a girl, a pacifier, and ear of corn (“Corn popped into my mind”). (My guess: “Ice Box” singer Omarion) 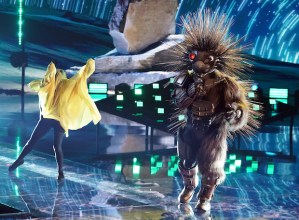 ROBOPINE | The spiky singer displayed nice vocal control on Boyz II Men’s “Water Runs Dry,” which followed a clues package that focused on “someone I love dearly who was a huge part of [a project he was involved in that eventually became a theme-park ride?] who is no longer here.” Other clues included: books; eggs, toast and a stick of butter; jam; darks, comedy and tragedy masks; and a lightbulb. (My guess: The Fast and the Furious‘ Tyrese Gibson)

PIGLET | I have a soft spot in my soul for Phil Collins’ “Against All Odds (Take a Look at Me Now),” and Piglet did the power ballad proud during his performance this week. Clues included: plastic vampire fangs; mention of being in a fraternity; a 1 standing up with 2, 3, 4 and 5 lying down; four gold bars; and mention of catching a touchdown from Dan Marino. (My guess: 98 Degrees member Nick Lachey) 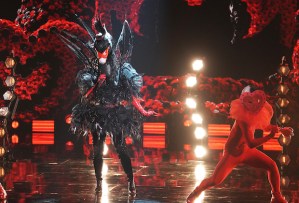 BLACK SWAN | You all already know that I think Black Swan is the bee’s knees, and her cover of Stevie Wonder’s “Do I Do” didn’t do anything to change my mind. Clues included: an umbrella, New Hampshire (I think?), Swan Kissed Soda, and Mariah Carey — whose record sales she passed at at least one point in her career. (My guess: “Baby It’s You” singer Jojo)

RUSSIAN DOLLS | “We embraced not being the coolest,” the dolls told us in their pre-performance video before absolutely slaying “Shallow” from A Star Is Born. Other clues included: a nickel and a dime, a gold medallion, references to pop and a wok. (My guess: “MMMBop” band Hanson) 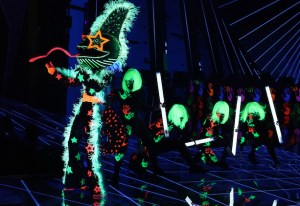 CHAMELEON | Chameleon truly is the lizard king, and I don’t know if he can do anything, but he can certainly bring the house down with his performance of Busta Rhyme’s “Put Your Hands Where My Eyes Could See” — and he did during the broadcast. Clues included: orange slices, references to being a military kid, brownies for $ale, a plane, a captain’s hat and high top sneakers. (My guess: Rapper Wiz Khalifa)

THE UNMASKING | Robopine was unmasked, and he was revealed to be Gibson.

Now it’s your turn. What did you think of the episode? Sound off in the comments!