A flat and scattered judicial docudrama that unpacks the case of Mohamedou Ould Salahi with the crude imprecision of a courtroom sketch artist, Kevin Macdonald’s “The Mauritanian” is buoyed only by Tahar Rahim’s humane performance as a Guantanamo Bay prisoner who spent 14 years in the extrajudicial facility without ever being charged with a crime, and its unwavering conviction that America’s highest ideals can lead a path straight to Hell if they’re not considered absolute. “The Constitution doesn’t have an asterisk that says terms and conditions apply,” no-nonsense Albuquerque lawyer Nancy Hollander sniffs at one point, Jodie Foster delivering the line as if her character knows that it’s the thesis of the film she’s in.

The sad fact that Guantanamo Bay is still open would be enough to emboss “The Mauritanian” with enough clear relevance, but — at a time when so many in our government are adhering to the Constitution with all the reverence of an Ikea instruction manual — the movie’s triple-underlined insistence that American exceptionalism can’t survive exceptions should land with the righteous fury of our better angels screaming at us from the heavens. It doesn’t. As recent days have made all too clear, watching people tip-toe towards the right side of history doesn’t tend to make for great human drama, especially when they’re lagging so far behind most of their audience.

Written by Rory Haines, Sohrab Noshirvani, and journalist M.B. Traven (the latter receiving a “story by” credit, despite the fact that so much of this film is devoted to Salahi’s personal suffering and derived from the best-selling memoir he wrote from his cell), “The Mauritanian” begins in the months just after 9/11, a time when the American government was, even by its own standards, aggressively rounding up just about anyone it could find with brown skin and a few shady connections. Even more than usual.

The sweet-faced Salahi (Rahim) appears to be caught in the dragnet, as not even the local police seem to know why they pull him away from a beachside wedding soon after he returns home from the German university he attended on an engineering scholarship. There’s some chatter about a cousin who might be an al-Qaeda operative — and may have even called Salahi from Bin-Laden’s phone — but the evidence is thin. If not for the moment where he secretly wipes the contacts from his phone before surrendering to the cops, there wouldn’t be any reason for us to doubt that Salahi was guilty of anything more than association. Rahim inhabits him as a gentle, almost child-like soul; helpful, quick to smile, and kind to his mother.

“Save me some tajine” he says to comfort her as he’s whisked away, unaware that they’ll never see each other again. With that moral bedrock in place, “The Mauritanian” never meaningfully questions Salahi’s innocence because it refuses to presume his guilt. That doesn’t stop the film from trying to muddy the waters with a few passages of cheap suspense, or from skirting over Salahi’s involvement with the mujahideen in a way that makes that seem more implicating than it was, but such a perspective serves as a moral corrective to the basic idea of Guantanamo Bay.

The issue of perspective, however, still proves to be a major problem for this movie. In the aftermath of its arresting prologue, “The Mauritanian” splinters in too many directions at once as it tries to frame Salahi’s imprisonment as the Schrödinger’s Cat of extralegal justice. He’s technically alive, but dead to everyone who knows him at the same time. He’s in American custody, but not on American soil (or subject to American rights). It’s the kind of FUBAR situation that Nancy Hollander has been fighting against since the Vietnam War, and she can’t resist investigating the deep backlog of Guantanamo detainees once Salahi — her new pro-bono pet project — is the first of them to be targeted for the death penalty. With her trustee assistant Teri Duncan in tow (Shailene Woodley, overqualified for a role that requires her to do little more than smile and sweat), Hollander zips down to Cuba and starts giving Salahi the full Clarice Starling treatment.

Instead of a cannibalistic madman who slithers his tongue at her from behind a plexiglass wall, Hollander finds Salahi to be a gentle man whose endearingly broken English betrays trauma, but not malice. He says things like “see you later, alligator,” asks after his mother, and jokes about Charlie Sheen’s girlfriends because his only news source is the white noise he overhears from the “E Exclamation” channel on the prison guard’s TV (a factual detail from Salahi’s time at Gitmo). Hollander is a lot more jaded than her younger colleague — literally all we know about her is that she’s separated from her husband, likes a thick red lip, and would rip lady justice’s eyeballs right out of their sockets if that’s what it took to keep her blind — but we know it’s only a matter of time before she comes around. 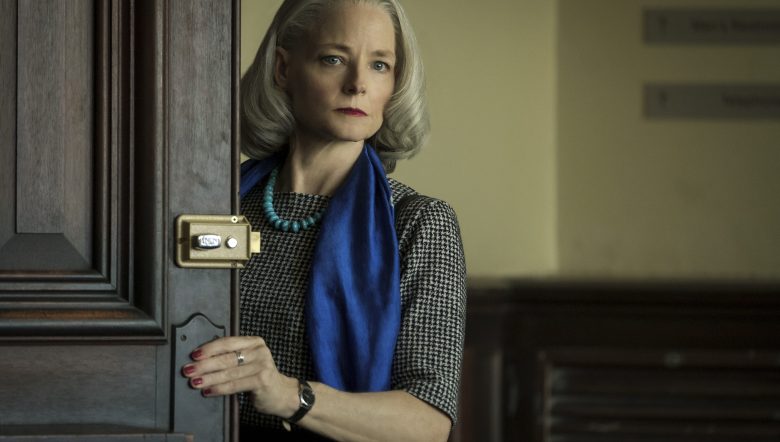 Clichéd as that character arc might be, the film doesn’t do itself any favors by shortchanging it. The tea only grows weaker whenever the action shifts towards Lt. Col. Stuart Couch (a southern-fried Benedict Cumberbatch, who’s never met a mediocre historical drama he didn’t want to slum his way through), a faith-oriented military type whose best friend was one of the co-pilots on Flight 175. That tragic motivation — unpacked in a painfully hokey scene that never would have survived into better Macdonald dramas like “The Last King of Scotland,” and seems at direct odds with the piercing truth of documentary work like “Touching the Void” — compels Couch to prosecute Salahi’s case, only for him to realize that something fishy is happening along the way. “I’ve never been part of a conspiracy, but I’m starting to feel like this is what must feel like to be on the outside of one,” he tells a government crony played by Zachary Levi (in a bit part that reeks of big “I guess that’s Zachary Levi?” energy). Crouch is soon folded into the film’s confederacy of well-intentioned Americans who slowly come to realize that maybe this Donald Rumsfeld character isn’t quite Avengers material.

All of these characters pull focus from Salahi at the heart of the story, and leave Macdonald racing to squeeze 14 years of solitary confinement into a few erratic minutes of screen time. It can’t be done, despite the raw humanity that Rahim brings to the role (best expressed in a subplot involving an unseen fellow prisoner, and also in the gentle way Rahim breathes in the sun and unfurls his prayer rug). Scuzzy-looking flashbacks that are shot to suggest a “Purge”-inspired Instagram filter take us through Salahi’s brutal torture upon arriving at Guantanamo, complete with waterboarding, sleep deprivation, and sexual humiliation. These feverish sequences are all rooted in a very real foundation of truth, but they’re presented in a way so fractured and abstract that they convey little beyond their own inability to dramatize the horrors of what Salahi was put through (and the worthlessness of the forced confessions that such treatment was designed to draw out).

Given that our sympathies are with him from the start, the time-hopping structure seems especially superfluous, as seeing the injustices perpetrated against him has little impact on our understanding of his story. In that light, Salahi’s only meaningful transition is from being a suspect of imagined crimes to a witness of several concrete ones, and the film’s most affecting moments shimmer with the understanding that the prisoners at Guantanamo Bay gradually became governmental liabilities. If they didn’t have anti-American sentiments when they were detained, it would be extremely understandable if they did by the time they got out. If they ever got out (and some of them still haven’t).

If “The Mauritanian” is a slight cut above so many of the pious and self-flagellating political thrillers that Hollywood churned out in the years after 9/11, that’s because it doesn’t aim to exorcise America’s guilt so much as it tries to use it as a necessary step on the road towards forgiveness. We can’t meaningfully address the way our country betrays its promise until we formally acknowledge that it has, and — when it comes to Guantanamo Bay — neither Republican nor Democrat administrations have had the courage to look themselves in the mirror. Alas, that’s exactly the kind of rhetoric that “The Mauritanian” would stuff into someone’s mouth rather than dramatize, and its no wonder that this is one of those movies where the closing title cards (and the obligatory footage of the real Salahi that plays during the credits) leave more of a mark than anything that comes before.

STX Entertainment will release “The Mauritanian” in theaters on Friday, February 12.

As new movies open in theaters during the COVID-19 pandemic, IndieWire will continue to review them whenever possible. We encourage readers to follow the safety precautions provided by CDC and health authorities. Additionally, our coverage will provide alternative viewing options whenever they are available.