Look, no one in The Morning Show‘s second season had their best year ever. There was the COVID-19 pandemic. There was a major death. There was a really poorly timed declaration of love followed by a trip to a coronavirus-infused emergency room.

But out of all of the morning-show personalities, Desean Terry‘s Daniel might’ve had the most frustrating year. At the end of Season 1, with Alex and Bradley as whistleblowers alerting viewers to the network’s legacy of covering up scandals, a new world order seemed poised to sweep through the studio. But Season 2 found Daniel — a gay, Black TV host with dreams of getting a seat at the table — routinely slapped down anytime he was poised to advance. By the end of the finale, he quit the show and drove west to remove his elderly grandfather from a potentially COVID-infected nursing home.

Now that the season finale is streaming (read a recap and post mortem with Reese Witherspoon and Billy Crudup), we can share our chat with Terry about Daniel’s tough Season 2 ride (including that impromptu performance of Neil Diamond’s “America” we’re still cringing over.) Read on for his thoughts.

TVLINE | At the end of last season, it seemed like a sweeping change might be underway at the network. And then we come back and, at least for Daniel — correct me if I’m wrong — it seems like not much has changed there.
Yeah, I think that’s 100 percent facts, actually. 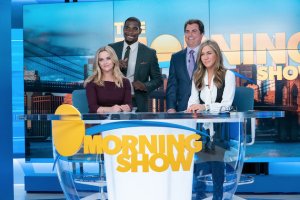 TVLINE | Do you think he thought that maybe there was a new era sweeping in?
You know, it’s just really hard for me to respond to stuff concerning Daniel’s relationship with TMS. Because I immediately attach it to the real world, and people who feel marginalized within the workspaces in America, in the world and capitalism, and how it’s oftentimes perilous. So, sometimes I have to say to myself: Wait, are we talking about Daniel, or are you getting your own stuff out, Desean? [Laughs]

TVLINE | Well we also want to hear what you think, Desean, so please feel free to answer however you like.
It seems like Daniel has decided to bury himself deeper into the work, because I think he’s covering up for a lot of hurt in the TMS world. He didn’t get the anchor position, they brought somebody else in, and that’s where he begins this season. And then it really becomes unleashed when the Alex Levy character is invited back to TMS with a huge raise and [he knows] the full story as to what happened, and not seeing her as the feminist hero that the rest of America is seeing. That really sets him off.

TVLINE | Daniel is the first character to take the coronavirus seriously. He’s the one sent to China to cover it. Throughout the season, he’s actually doing the work — yet he gains no traction at the network. That’s so frustrating.
Yeah, it’s extremely frustrating… Yes, he’s getting the short end of the stick every step of the way. First, he didn’t get the anchor position, then he goes and he does the deep dive with them sending him to China, and then when he comes back, he’s in a more tenuous place with the network. None of these efforts have been validated for him. So it’s a really hard struggle, which leads to where he ends up at the end of the season: He realizes that this is just not the place for him at this moment. I support that decision to leave the network at that point in time, because he really had it. 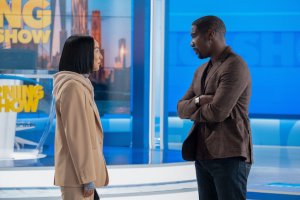 TVLINE | The “star power” conversation that he has with Mia is gutting.
Yeah. Yeah, exactly. But it starts this huge conversation, because they said he doesn’t have the it factor… One might say that they probably have [done audience research]. But it then brings this question of: How are you going to trust a system which is deeply aligned with advancing white folks? Do you see what I’m saying? … I forget the exact words that [Daniel] says, but he says that even bringing up this idea of this “it factor,” that is a tool of white supremacy, to be quite frank and clear.

And so he’s trying to separate himself from that whole system… It’s about separating your personal relationship with things in comparison to, “Wait, this system is flawed.” And the system is the thing that keeps Daniel down, and it’s difficult for people to see that, right? 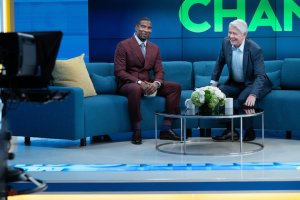 TVLINE | Right. It seems like he would be such an obvious employee to elevate. It’s horrifying to me that he doesn’t get any reward.
Yeah, well, I think maybe with Daniel — and this is a maybe, I’m trying to figure it out myself — that’s because he does want to have uncomfortable conversations… And that’s not necessarily the morning TV that UBA wants.

TVLINE | I want to talk to you about the “America” scene. First, did you have a good grasp on Neil Diamond’s lyrics before you shot the scene? Or did you have to bone up?
Oh, yeah, no… I did not know that song. [Laughs] And you know what’s interesting is that we went through a couple of different songs and then [showrunner] Kerry [Ehrin] landed on that song, which I think is very interesting. It’s a very layered song… And somehow Daniel just knows the lyrics to the Neil Diamond song.

I love how people respond to it. [Some] people are cheering, some people are like, “Oh, my God my stomach hurt the entire time. What are you doing?!”

TVLINE | Right now, we have no idea if there will be a third season. But if there is, do you think that it’s scorched earth for Daniel at UBA? Or do you think there’s any reality in which he might return?
Oh, I definitely think that there’s opportunity for him to return. To be quite frank and honest, at least the advice I’ve gotten, whatever my relationship with corporate America, is that leaving sometimes will make you more valuable. And it’s taken Daniel a long time to actually have the balls to take care of himself in a different way. So, I think that, in some shape or form, it could probably give him more value at TMS. And he may say to himself, “Well, I should’ve just done that sooner.”