I’m beginning to think Harry Ambrose is too old for this ish.

The Sinner‘s Season 4 opener picks up a year after the Jamie Burns case, and the since-retired detective (again played by Bill Pullman) is still haunted by visions of the night he shot and killed the sociopath. (He continues to suffer from post-traumatic stress, and he’s only recently weaned off of antidepressants.) He and his partner Sonya (fellow returnee Jessica Hecht) travel to Hanover Island in northern Maine for some much needed rest and relaxation, but an unexpected tragedy occurs almost immediately upon their arrival. Ambrose crosses paths with Percy Muldoon (Orange Is the New Black‘s Alice Kremelberg), heir to the Muldoon family fishing empire, and hours later he watches as she falls to her death — or so he thinks. 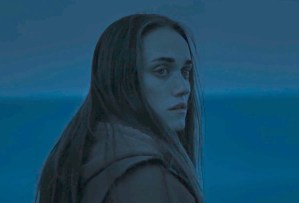 Ambrose ventures out for a late-night walk and sees Percy run out from someone’s backyard. He follows her from close behind and watches as she walks directly off a nearby bluff. He presumes it’s a cut-and-dried suicide and calls the local police department to report what he saw. But the local authorities are unable to find a body, and it’s unlikely that she washed out to sea.

Chief Lou Raskin (On the Basis of Sex‘s Joe Cobden) arrives on the scene, but he’s clearly not cut for an investigation of this scale. And Percy’s family — which includes her grandmother Meg (Watchmen‘s Frances Fisher), her father Sean (Mare of Easttown‘s Neal Huff) and her uncle Colin (Ozark‘s Michael Mosley) — is unconvinced that she leapt to her death. 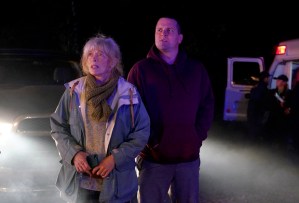 In fact, Meg nearly convinces Ambrose that the fall could have been a figment of his imagination — and all the evidence that accrues over the next 72 hours seems to suggest that she’s right. Maybe Percy’s not dead.

The following day, we find out that a lobsterman called into Hanover P.D. to report that he saw Percy drive her car a half hour after Ambrose allegedly saw her jump. Afterwards, Ambrose makes a point to retrace Percy’s steps. As he stands at the end of the bluff, he remembers that Percy looked over her right shoulder before she jumped. Was she being followed? He walks back into the forest and finds what looks to be her abandoned belongings, including a cross and a piece of fishing rope. All the items are strategically placed beneath a fallen tree stump. We also discover that Percy was at The Knot, a nearby pub, the night she went missing. The barmaid saw her enter the bathroom and exit 15 minutes later with a bloodied temple.

Later on, Percy’s car is found abandoned on the outskirts of town. The keys were left in the ignition. A potential eyewitness who lives in a nearby mobile home tells the authorities that he didn’t see or hear anything, but he seems sketch.

On Day 3, Ambrose accompanies Lou to the Muldoon estate. It’s a full house, and everyone from Meg, to Colin, to Percy’s cigarette-smoking ex-boyfriend Brandon (The Killing‘s Gharrett Patrick Paon) is there. (That last detail may or may not be important.) Meg takes Ambrose aside and apologizes if she previously seemed dismissive. Chief Lou has filled her in on Ambrose’s history, and she wants him on her granddaughter’s case. She thinks Percy was hiding something. She had been going out after work and remained vague about where she had been. She also started collecting things — a hodgepodge of seemingly useless trinkets, as well as another piece of fishing rope. She also had recently acquired a book — The Lunar Goddess: Connecting to the Spirit of the Earth — and this specific book seemed out of character for her.

As Ambrose continues to investigate, he finds out that Percy wasn’t alone the night he saw her run off. He surveys the grounds around Pier 2 finds an empty gum holder — perhaps it contained nicotine gum? Security footage subsequently reveals that Percy bowed down to/worshipped a hooded figure that night.The identity of the hooded figure is not revealed. 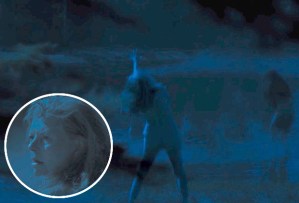 Later on, Ambrose returns home. He’s on the porch when suddenly he hears chanting from afar, and it’s similar to something he’d heard earlier in the episode. He follows the chant and stumbles upon a group of naked women. Are they attempting to channel their inner Lunar Goddess? When he suspects he’s been spotted (are my eyes deceiving me, or is that Meg?), he runs back to his house and plants himself on the couch. Before long, he hears a voice.

“Whatever you think it is, you’re probably wrong,” the voice says.

“I know,” he answers, before the shot pans and reveals Percy.

Then she disappears. This, for sure, was a figment of his imagination.

In addition to the chief, Brandon and the Muldoons, Episode 1 introduces two other key players: marrieds Stephanie and Mike Lam (The Flight Attendant‘s Cindy Cheung and The Man in the High Castle‘s Ronin Wong), who previously worked as fishermen and have recently started their own operation, which puts them in direct competition with Meg and Sean. At one point, we see Meg yell at Mike for docking his fishing boat on Muldoon family turf.

What did you think of The Sinner‘s Season 4 premiere? Grade it via the following poll, then log your guesses about Percy’s whereabouts (and what she’s up to) in the comments.