”The DOJ can tell you precisely how many Korans were burned last year in the United States, but they don’t keep track of Christmas trees,“ Carlson says 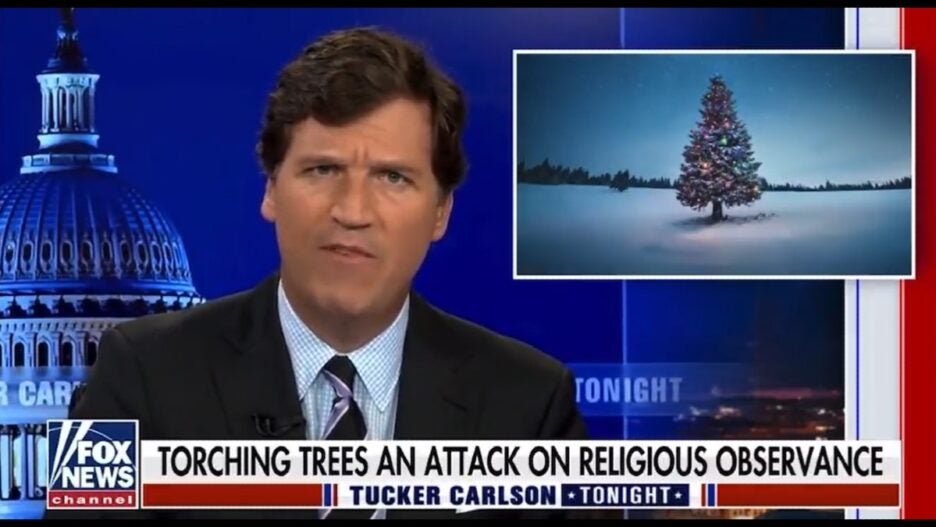 Early Wednesday morning, some jackass decided to set fire to the Christmas tree outside of Fox News headquarters in New York City. Which is a pretty crummy thing to do. The fire was extinguished without causing damage to any other property or people, and police arrested a 49-year old man shortly after midnight, Eastern Time.

No motive has been determined; police told local media that the crime doesn’t appear to be premeditated, the unidentified man acted alone, and that there appears to be no political motivation.

But on Wednesday night, Tucker Carlson was A) convinced it was a religiously motivated hate crime, B) suggested there might be some kind of larger trend of people burning down Christmas trees, and C) suggested that federal law enforcement is deliberately ignoring the problem.

“Torching Christmas trees is an attack on Christianity. Obviously. It’s an assault on religious observance,” Tucker said during his show. “By current standards, destroying someone’s religious symbol would be called a ‘hate crime.’ That’s a category much beloved, and meticulously chronicled, by the Biden Justice Department.”

“The DOJ can tell you precisely how many Korans were burned last year in the United States, but they don’t keep track of Christmas trees. Why is that? Well, because they could care less. [FBI Director] Christopher Wray [who was appointed by Trump] isn’t dispatching a team of FBI agents to get to the bottom of Christmas arson. Merrick Garland is not going to issue a press release about it,” Tucker continued.

Watch the clip below:

It needs to be stated that a Christmas tree isn’t actually a “religious observance,” because there isn’t any theological significance to the tradition of Christmas trees. Though of course they are an important tradition in many majority Christian communities.

It’s unknown precisely where the traditions true origins are, but they are connected to ancient pagan traditions in Northern and Eastern Europe as well as the Roman Empire. The modern Christmas tree as we know it, however, can be traced with certainty to late 1500s Germany and Eastern Europe, where, yes, they became a popular part of the secular aspects of Christmas celebrations.

They were imported to the United States in the late 1700s by German mercenaries and immigrants. And by the mid-1800s they were very popular even as religious leaders condemned them as pagan artifacts. But the convention of cities and businesses erecting large public trees emerged in the early 20th century. Read a bit more about it here.

But as we said, even if the tradition is connected to the celebration of Christmas, they aren’t actually religious artifacts and erecting them isn’t part of any religious rites. They’re just a beautiful looking decoration people like to put up during the Christmas season. That’s probably why the justice department doesn’t consider burning them to be a crime on par with burning literally the holy book of Islam. (Incidentally, anyone burning a Christian bible would, in fact, likely be investigated as possible hate crimes just like people who burn the Koran.)

Even so, burning a Christmas tree is a huge dick move.