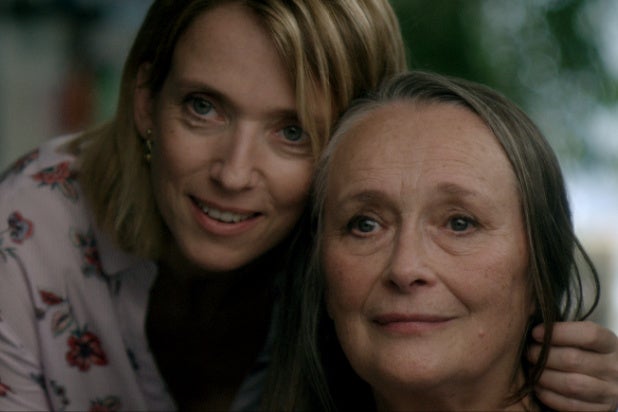 “Two of Us,” the first narrative feature from director Filippo Meneghetti, is a love story between two older women played by Martine Chevallier and Barbara Sukowa. It aims straight for the heartstrings but is foiled in this pursuit by plot implausibilities and an unwillingness to consider the motivations of the other characters in the story.

“Two of Us” opens with images of birds in flight, aggressive packs of them making threatening noises on the soundtrack. (This is a movie with an insistent and sometimes overbearing sound design.) We see two little girls at play, one of them counting as the other one goes to hide, and there is an effective air of menace about this sequence.

Madeleine (Chevallier) and Nina (Sukowa) live in apartments across the way from each other. When we first see them and their fond feelings for one another, they are shot in the darkness of night, and they kiss in darkness. We sense right away that they are a longtime couple and that they feel the need to keep their relationship secret, which is expressed visually. They dance to an Italian version of “I Will Follow Him,” which seems to be their song.

Madeleine and Nina have planned to sell their apartments and retire together to Italy, but Madeleine has two children, Anne (Léa Drucker) and Frédéric (Jérôme Varanfrain), and she has never managed to tell them about her relationship with Nina. When she’s finally on the point of telling them the truth, she’s stopped short by a remark from Frédéric, who says that Madeleine couldn’t wait for his father to die. Chevallier gets across the dutiful side of Madeleine here — the side that kept her married to a man she didn’t love for years just to raise her children and do what she thought was expected of her.

Nina gets into a fight with Madeleine when she learns that Madeleine has been unable to tell her children about their lifelong love for each other. While she yells at Madeleine in the street, Meneghetti lingers on a shot of food left burning on the stove in order to symbolize that something has gone very wrong for Madeleine. Again, an air of menace and threat is conveyed here visually and through the cranked-up sound.

But this is the point where “Two of Us” goes off the rails for good. Madeleine has had a stroke and she is unable to walk or speak for the time being. Her children send her home with a surly caregiver named Muriel (Muriel Bénazéraf), and right away Nina has trouble with her. The perplexing thing about “Two of Us” is that it seems to be set in the present day, yet Nina acts as if telling Madeleine’s children about their love for each other is utterly impossible.

The gold standard for this sort of story is still the heartbreaking segment of “If These Walls Could Talk 2,” which starred Vanessa Redgrave and Marian Seldes as a longtime lesbian couple. Abby (Seldes) dies, and her children come to evict Edith (Redgrave) from the house she has shared with her partner for many years. That narrative was so memorable and stinging because writer-director Jane Anderson made us see that Abby’s nephew, played by Paul Giamatti, begins to realize what’s going on, but financial considerations force him to do something very wrong. And since the story is set in 1961, no one involved feels they can really verbalize what’s happening.

In “Two of Us,” there is the same sense of guilt and evasion, but it makes no sense, and the characters of Anne and Frédéric are perplexing when they react so badly to finding out about Nina. Why do they act the way they do? Are they religious? Is Anne hurt because she thought she was close to her mother? None of this is fleshed out, and Nina’s behavior with Madeleine’s children also makes no sense in the last third of the film. If you are trying to mollify people, why would you toss a rock through their window in anger?

Meneghetti displays some talent for scene-setting and atmosphere, but “Two of Us” flounders because it presents a sketchy story with heroes and villains without trying to understand why people behave the way they do.

“Two of Us” opens in select theaters and virtual cinemas on Feb. 5.