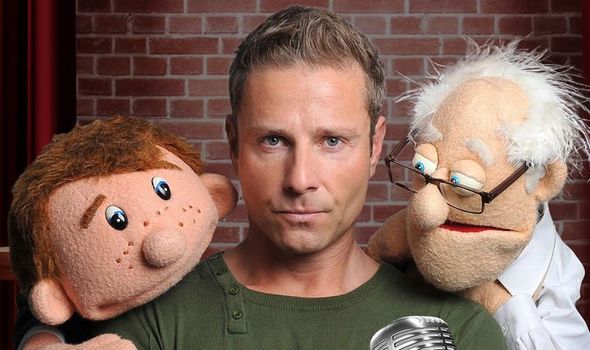 “I had a breakdown,” Paul, 49, reveals for the first time. “I was so depressed. It got too much for me. I was playing Vegas, I was meeting heroes like the magician David Copperfield. It should have been the time of my life but it was the opposite.”

Londoner Paul had not expected to win the 2015 series of the star-making US talent show, created by Simon Cowell, but he grabbed the opportunity with both hands.

“It was a very tense, stressful time and it got absolutely crazy,” he says. “I felt like David Frost, jetting between the US and the UK to do a Spring tour, and slotting in meetings in New York and dates in Canada too. I was also trying to find a home in Vegas with my girlfriend, now my ex-girlfriend…”

As part of his AGT victory, Paul won $1million and signed a three-year contract with the Planet Hollywood Resort & Casino for a weekly three-night residency. In the event, he only did 100 shows there.

“Headlining in Vegas, it’s what you dream about when you’re starting out,” he says. “That’s the mark of success. But things were complicated. For a start, they brought the show forward by three weeks, so I was a hot sweaty mess on opening night. There were a lot of celebrities in – and pros who are a hard audience to work. In a really quiet moment, I’m on stage and I hear an English accent shout ‘I love you Paul!’ I said, ‘I thought I told you to stay in the trunk!’

“That got a good laugh but for the rest of the show all I could hear was someone saying ‘Get off, you’re rubbish!’ It was Nigel Havers, one of my best friends, who had flown over specially to heckle me!”

I was always a bit odd as a child. I liked just showing off. I used to dress in my mum’s clothes and pretend to be Margaret Thatcher!

That friendly sabotage, and the legions of fans, turned out to be the twin highlights of the tough residency. “It took me two months to learn how to work a Vegas audience,” he says. “They were so difficult because they were such a mishmash – there were drunks, or people who’d been comped, or people who’d just lost all their holiday money who were depressed and drunk…

“But the hardcore America’s Got Talent fans were great. I did a meet and greet after every show. It felt like a conveyor belt – photo, quick chat, then repeat. It’s like a machine. But I felt loved. And I tried so hard. I was rewriting material every night, doing press and promotional stuff every night too to get the show noticed…”

The jet-lag wasn’t a problem, he says. “I could cope with that – I’m really good when I’m tired. I’d fly in, unpack my case in the wings, have a bourbon and walk on stage. I was getting by on sleeping tablets and adrenalin.”

Corporate shenanigans were another story. Despite the three-year contract, the hotel axed the show after six months. “There was a get-out clause in the contract. But they’d cut my pay after the first month, even though we were still getting good houses,” Paul recalls. “My crew were working on two shows simultaneously and the other show was getting no one in…We were doing much better but they ended me. It was such a head-f***.

“I was still paying for the place I’d rented in Vegas for months afterwards.”

Paul, back on the road in the UK this month, continued to play successful shows in the USA up until lockdown. He has been a star at home since winning ITV’s The Big Big Talent Show in 1996.

Zerdin is his real name, his paternal grandparents escaped to England after the Russian revolution. His parents were both actors; his father was also a music producer and his mother a Radio 2 presenter.

Paul was ten when a family friend made him a puppet theatre. He started to put on his own shows and the hobby quickly turned into an obsession.

“Then I was given a book on ventriloquism written by the legendary Ray Alan” — a famous television ventriloquist — and before long I was spending half an hour a day in front of the mirror practicing talking without moving my lips.

“I was always a bit odd as a child. I liked just showing off. I used to dress in my mum’s clothes and pretend to be Margaret Thatcher! I was given a box of magic tricks for Christmas and when my parents had dinner parties, I’d do card tricks.

“We had a serving hatch between the kitchen and the dining room, and I would do these little puppet shows. I think that came from watching Sesame Street and loving the Muppets. Ray Alan and Lord Charles was the first ventriloquist I ever saw, and he blew me away. I remember thinking that’s the way to have a puppet but still be in vision so I could still be the star!”

At 17, Paul got a part-time job at Davenports’ Magic shop in Central London. He started to develop his own magic skills and became a children’s entertainer, making his TV debut in 1990 on BBC1’s children’s sitcom Tricky Business. In 1991 he performed as a ventriloquist on TV’s Hangar 17 and began working in holiday camps and working men’s clubs honing his skills.

His next television break was on GMTV’s morning show Rise And Shine, where he unveiled his puppet character Sam for the first time.

Winning Jonathan Ross’s The Big Big Talent Show propelled him onto scores of UK TV shows including Tonight At The London Palladium, You Bet, The Generation Game and A Royal Gala for The Prince’s Trust. In 2000, he made his Edinburgh fringe debut.

“I’d cut my teeth doing the Comedy Store and Jongleurs by then,” he says. “I’ve always wanted to entertain every audience. That kind of comedy was a rebellion against the traditional and now it’s the mainstream, but I could always do both.”

Lately, he’s been working with radio-controlled dolls “that move without me being in the room – that freaks people out,” he laughs.

Paul warmed up for his new tour with dates at the Horseshoe Bar at Blackpool Pleasure Beach. “It was a long drive from Surrey but it felt so good to be back working. I absolutely loved being on stage – they were my first gigs since they shut down Pantoland at the Palladium. But we’ll be back with that at Christmas, with Julian Clary and Gary Wilmott – we’re like the new Crazy Gang!”

He pauses and says, “But now I want to do more. I want bigger, I want more. I want a Netflix special! I want the O2! I want to sell out Wembley Arena! I feel lucky. I’ve already done so much. I think I’ve come a long way for a bloke with a puppet…”

Paul Zerdin Hands Free Tour will be in theatres around the UK from 19 September. Find tickets here