One discernible response from the traditional broadcast networks to the challenge of streaming service competition has been to hurry things along. Crime series increasingly move at machine-gun speed, as if defying viewers to turn off. S.W.A.T. follows that lead. As this episode begins, a prison riot is under way and gangs have seized control of blocks in a privately run prison. Hondo (Shemar Moore) and his team hit the ground running, creeping down corridors, efficiently containing the rampaging inmates. But Nazi Eagles leader Gunnar Cade (Gideon Emery) eludes them and he's taken a hostage with him. Then a secondary storyline emerges, involving the wife of one of the team members. S.W.A.T. is fast-paced, action-packed and admiring of its fit and fast law enforcers, who think of each other as family. 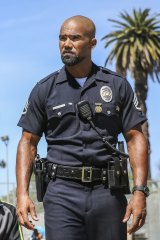 In this German drama series, a meteor is on a collision course with our planet and it's predicted to hit the centre of Europe. So what to do as the end of days approaches? What's proposed here doesn't paint an appealing picture of our humanity. There's not a lot of love, kindness or compassion going round. People jockey for places in the bunkers, which have limited capacity and might not, in any case, provide protection. An algorithm created by the government, allegedly to randomly assign numbers that provide bunker access, appears to be skewed towards the rich and powerful. The fourth episode of the eight-part first season takes in a range of people – police, political operatives, white supremacists – but the main focus is on doctor Susanne (Christiane Paul), her family, and the pregnant Marion (Nora von Waldstatten).