The sun visors are down and so are the inhibitions in the terrific start to the second season of this Australian comedy about the commuter conversations in cars on the journey to work and back each day. Astutely funny in how it opens up these characters to comic scrutiny, Trent O'Donnell and Adam Zwar's series finds the employees of Kosciusko now working for the rebranded K2 and its new American owners, which allows for the introduction of hardnosed imported CEO (perpetual best supporting comic actor Kristen Schaal) and her local driver (Stephen Peacocke). 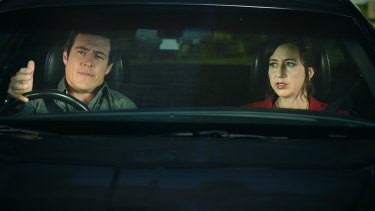 They have an obvious cultural clash, enhanced by the power imbalance, but there's friction afoot in every automobile as close confines lead to unexpected remarks. The returning Mandy McElhinney gets Anne Edmonds as her character's sister, which is a hilarious pairing, while Justine Clarke playing the tough nut in a marriage provides a salty new perspective. It's a simple concept that's been smartly executed and you should buckle up for the ride.

It's been a fast ascent for Ryan Chamley's single camera Australian comedy about the travails of perpetually put upon retail workers: what began as a web series got picked up by Netflix, and now a second season has been commissioned by Seven. The goings on at big-box retailer Electroworld – which is shockingly well staffed – are readily familiar from any number of workplace comedies, as are characters such as the overly officious deputy manager Adam (Doug Lyons), manipulative piece of work Beeanka (Diana Antoinette Brumen), and perplexed everyman Dan (Nick Boshier).

What matters is whether there's enough for them to do, especially in finding storylines that reveal unexpected or amusing dynamics. That's definitely an issue for Rostered On, as are the simplistic production values and direction. There are sequences here, such as a visit to the abominable staff toilets, that suggest a wilder, absurdist vision, but for now this is a creaky comedy that too often falls short.