Season 2 of the Netflix dating show “Too Hot To Handle” premieres on June 23 and this season may just be even hotter than the last!

The new singles will stay in a posh Turks and Caicos villa — which is also where Season 3 is due to be set — but the tropical heat will be the least of their problems. There are plenty of rules to follow and the simmering singles are basically limited to talking to one another and need to resist any physical ways of connecting. Should they choose to ignore these rules, they can forget about their chances of taking home the $100,000 grand prize. That means kissing is a thing of the past! And pushing the boundaries further means the prize money will “drop faster than our contestants’ libido,” according to a release from Netflix (via People). While that’s the hook of the show, it’s safe to say these contestants have their work cut out for them.

It was common for past contestants like Harry and Francesca to make a connection, but viewers will notice plenty of new faces this season. Cam Holmes enjoys a specific type of elvish “role-play,” and Chase DeMoor is a professional football player. Keep reading for more details on Larissa Trownson, another newcomer whom you won’t soon forget!

Larissa Trownson is a lawyer 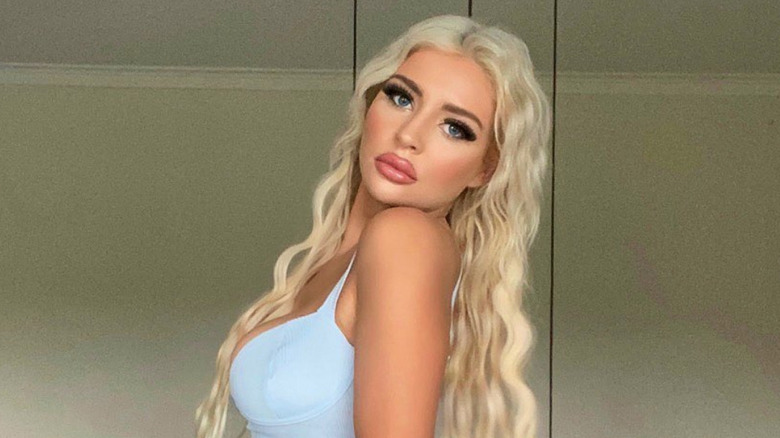 Larissa Trownson might have flowing blonde hair, but don’t let those locks fool you — she’s a lawyer! Larissa seemed proud of her law degree, writing on Instagram in 2016, “I graduated with a Double Degree: Law and BA (Criminology and Political Science). Thanks to everyone who supported me along my 5 year journey to becoming Elle Woods.”

The New Zealand-based lawyer “is a force to be reckoned with,” according to People. Although she enjoys when guys obsess over her (who wouldn’t?), “she isn’t a one-man kind of girl,” the outlet wrote. If Larissa has difficulty settling down with one man, she has quite the challenge ahead of her on “Too Hot to Handle.” It seems like this “Tinkerbell,” as People further described, will not have an easy time dealing with the temptation of multiple suitors.

When Larissa isn’t skimming over legal briefs, she enjoys parting, per the outlet. She also has a talent for makeup and could definitely moonlight as a cosmetologist in her spare time. Those red lips are something to behold and we’re sure Larissa will shake things up this season!