As kids, we are taught to never judge a book by its cover, but what about judging a crustacean by its shell? Jumping on the bandwagon of kids’ adventure films, Netflix’s animated romp “Back to the Outback” packs a lot of jokes into its warm and fuzzy message, though its characters are more scaly than cuddly. The film is the latest entry in Netflix’s growing slate of animated, kid-centric fare, clearly designed to compete with animation giants Pixar, Disney, and Dreamworks. And the streaming giant isn’t making a crazy bet, as its hopes to capitalize on the lucrative sphere (as it has with TV shows like “She-Ra and the Princesses of Power,” and by tapping “Doc McStuffins” creator Chris Nee for a sweeping overall deal) are proving more than possible: the film is another charming entry in yet another segment of potential Netflix dominance.

Netflix’s original film slate might be packed with all manner of auteur-driven features, especially as we continue to lumber through awards season, but tucked inside offerings that includes everything from new films from Jane Campion, first-time efforts from Lin-Manuel Miranda and Rebecca Hall, and yet another small screen blockbuster in the form of “Red Notice,” the streamer has also carved out a stellar assortment of content for kids.

Alongside recent live-action movies for slightly older viewers, like rom-com series “To All The Boys” and “The Kissing Booth” or the sweet dramedy “Finding O’Hana,” Netflix isn’t content to let a whole patch of the population live without their own Netflix Originals. With a peppy script and feel-good moral, “Back to the Outback” sets Netflix up to compete just as easily in the animated film sphere, alongside other recent winners like “The Mitchells vs. the Machines” and the “Shaun the Sheep” series. Disney, look out. 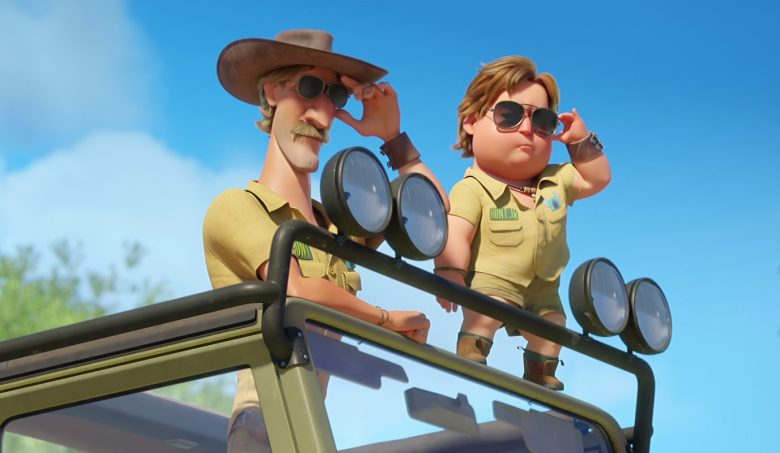 “Back to the Outback”

The film packs a familiar enough premise, and “Back to the Outback” borrows heavily from “Madagascar” for its zoo-escape setup, though the creatures here are snakes, spiders, and alligators. Friendly creatures behind closed doors, they must endure the pain and humiliation of being paraded around screaming crowds as evil killers. In reality, they have dreams and passions just like every other animal, and with the help of colorful animation and comedian voices, can actually be quite cute when viewed in the right light. With its clear message that beauty only runs skin deep, “Back to the Outback” also echoes themes from “Zootopia,” though the overtly political themes are a bit tamer here.

The film’s sweet heroine is a beautiful but deadly blue viper named Maddie (Isla Fisher), who was found still incubating in the wild by beefy and bombastic handler Chaz (Eric Bana). After hatching in his hand, her imprinting on Chaz turned into a bit of a crush, and she bats her eyes and slithers playfully in his hand. But she becomes heartbroken and disillusioned after her first show, when he calls her a deadly monster to the terrified crowd of kids and their parents. Their woes are amplified in contrast to Pretty Boy (Tim Minchin), an adorable baby koala who is showered with love and cuddles, including 24-hour sleep cams transmitted around the globe. When their gator matriarch Jackie (Jacki Weaver) is cruelly shipped off, Maddie convinces her motley crew to escape the zoo and return home — back to the outback.

The misfit gang includes Thorny Devil lizard Zoe (Miranda Tapsell), sensitive scorpion Nigel (Angus Imrie), and hairy spider Frank (Guy Pearce), a lovelorn lothario stuck in mating season with no potential mates in sight. Fuzzy Frank provides the comic relief that both kids and adults can enjoy, insisting he’s “single by choice,” and harboring dreams of becoming an interpretive dancer. When his mating instincts kick in he is overcome with wild leggy routines, moved by the dance. After accidentally nabbing Pretty Boy in their escape route, the little diva becomes their reluctant comrade. While crossing the Sydney harbor they meet a toothy shark, who helps them as an ambassador of the U.S.S., or Ugly Secret Society, a group of “sensitive, misunderstood animals” who have all “been condemned by society.”

Throughout their adventures, they call upon a vast underground network of ugly critters who come to their rescue. They are guided through the sewers by swarms of spiders, camouflaged as turds by dung beetles, and defended from Chaz by a trio of Tasmanian Devils on vacation. The moral is clear as day to any kid, though plenty of adults could use the reminder: Never judge any creature by the way they look. And, for animation devotees, the lesson is the same: Never judge a cute animated offering by its platform.

“Back to the Outback” is now streaming on Netflix.