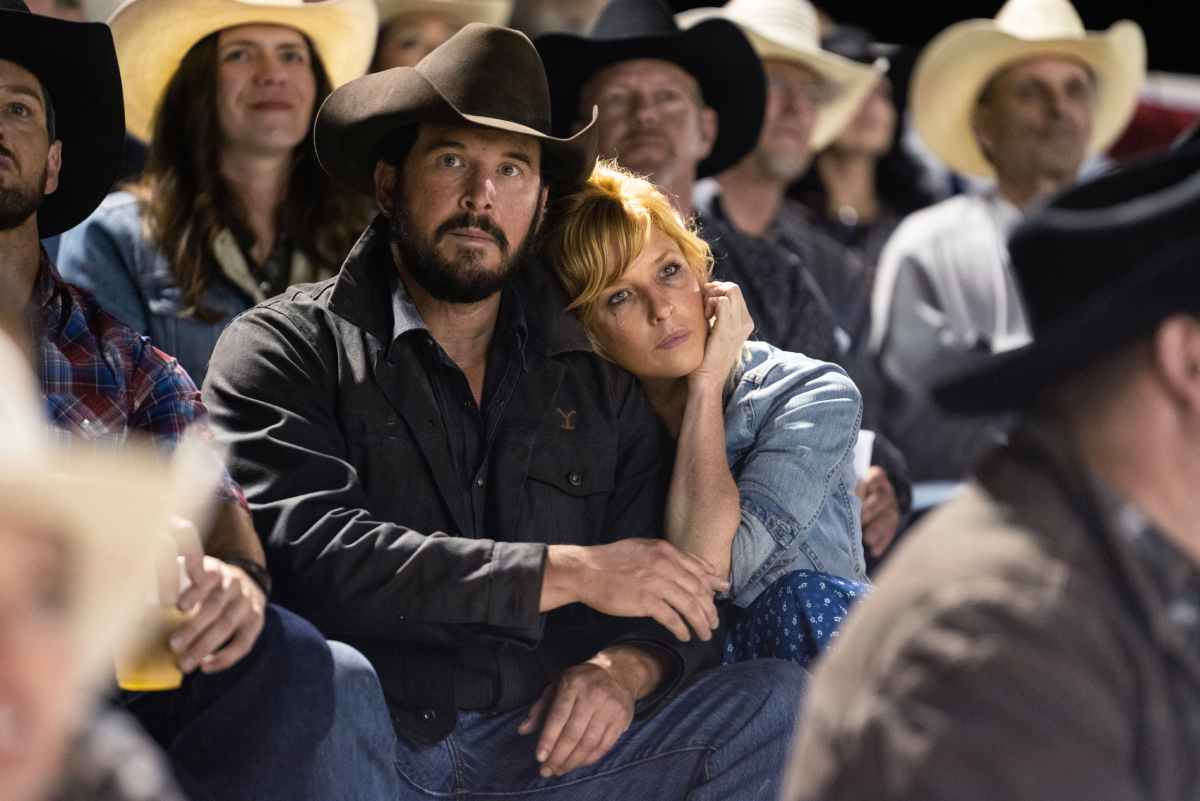 Yellowstone may be the story of John Dutton and his beloved ranch. But many fans tune in for the love story between Rip Wheeler (Cole Hauser) and Beth Dutton (Kelly Reilly). Their romance has been a slow burn during the first three seasons. But there’s never been any doubt about Rip’s feelings for Beth. Here are eight times Rip Wheeler and Beth Dutton proved they are #couplegoals.

8. Beth and Rip slow dance by the barn in ‘Yellowstone’ season 3

Every once in a while, Beth and Rip get a few moments alone on the Dutton Ranch. It happened briefly in season 3, and they took advantage. Rip lit up the area near the barn and turned on some country music, then he shared a dance with Beth.

7. Sipping whiskey and staring at stars

Beth is on the roof of John Dutton’s (Kevin Costner) house drinking whiskey after a nasty fight with her brother Jamie (Wes Bentley), when Rip shows up to join her. When the ranch hand says he thought she was done with whiskey, she tells him, “I’ll sip whiskey and stare at the stars with you Rip.”

As Rip looks at her — wanting to tell her that he loves her — Beth says to wait and tell her “when it saves me.”

Yellowstone fans got a peek at the beginning of Rip and Beth’s love story with a flashback scene in the episode “Touching the Enemy.” That’s when a young Beth (Kylie Rogers) walks up to a young Rip (Kyle Red Silverstein) — who has just arrived on the Dutton Ranch — and demands that he give her a kiss. When he tells her he doesn’t know how, she replies, “Me neither.” Then, Beth and Rip share their very first kiss and their love story begins.

5. Rip and Beth went on a morbid first date in ‘Yellowstone’ season 1

When Beth returns to the Dutton ranch in season 1, Rip asks her on a date by inviting her to a music festival, which she mocks. She later tells him to ask her to do something that’s tailored to her. So, he suggests they get drunk and watch some wolves kill an elk in the park. And that’s exactly what they do.

When Beth runs at the wolves and Rip chases her, she tells him she loves him in the most Beth Dutton way possible: “It’s only the things I love that die Rip, never me. Come to think of it, I’m surprised you’re still standing.”

4. The music festival call back

When Beth and Rip are on a date at a wild Montana honky-tonk, he walks up to her while drinking a glass of whiskey. That’s when Beth makes a reference to his first date idea in season 1 when she tells him the bar “is almost like a music festival.”  Then, amid the neon lights and the rowdy crowd of cowboys, Beth and Rip share a dance.

Rip and Beth’s relationship progressed significantly in season 3, which featured the first time Beth called Rip “baby.” It was a sweet moment that made him so happy, he asked her to repeat it. When Rip asks Beth what she wants him to call her, she tells him “wife.”

Later, she takes it back and tells him that she always runs because there’s only so much she can give him. Beth confesses to Rip she can’t have children, and he needs to know that being with her is the end of him. That’s when Rip tells her he doesn’t need kids or dogs running around the ranch because “you’re all I need.”

At the end of the season 2 episode “Resurrection Day,” the Beck Brothers send two assassins to Beth’s office at Schwartz & Meyer. Before they come storming in, Beth is able to send Rip a text that says “office help.” Then, the attackers proceed to kill her assistant before going after her.

Beth fights back and manages to stab one of the intruders and kill him. But the other beats her to a bloody pulp. As he’s getting ready to rape Beth, Rip busts in by throwing a chair through a glass wall. He fights off the other attacker before Beth crushes his skull with a giant ashtray.

Rip comforts Beth and calms her down by keeping his promise — saying “I love you” and making it clear he will always be her protector.

In Season 3, Episode 7 “The Beating,” Rip returns home to Beth after a tough day on the road with Jimmy (Jefferson White) and his girlfriend Mia (Eden Brolin). He comes storming in with a six-pack of Coors, chugs a few cans, then looks calmly at Beth.

As Rip cracks a smile, Beth tells him she’s asked her father for his permission to marry. Then, she gives her longtime love a ring.