When everyone was saying that the finale of this season of The Handmaid’s Tale was going to be “satisfying,” they weren’t kidding. After four seasons, the series’ big, bad Commander Fred Waterford (Joseph Fiennes) dies at the hands of June Osborne (Elisabeth Moss), his former handmaid, along with several other women who had been under his tyrannical rule. However, his wife, Serena Joy Waterford, played by Yvonne Strahovski, is completely unaware of what happened.

Still in governmental custody, Serena is pregnant, in a detention cell, and waiting to Zoom with her husband, who she thinks has flown to Geneva to stand trial for his crimes. Little does she know, his corpse is hanging on a wall in No Man’s Land, and his severed finger and wedding ring are their way to her in the mail. Though we may have to wait for next season to see Serena’s response to the news, Strahovski doesn’t hide her surprise over the finale.

“I was totally shocked,” she tells BAZAAR.com, speaking over the phone from L.A. “I just remember reading the bit where June has Fred pick between the whistle and the gun [before she attacks him]. And I just thought, ‘Oh, my God. Oh, my God. Is it actually going to happen this way?’ I was really, really riveted. Having not been able to talk about what happened, I’ve been saying to people that this is really probably the most satisfying season finale of this show, if not ever in TV. [Laughs.] There’ve been some really good ones, but this is definitely up there.”

Here, Strahovski talks to BAZAAR about that ending, the theories about the father of Serena’s baby, and whether a presidential run could be in Serena’s future.

People have been saying that this ending is satisfying, but is it satisfying for Serena? We don’t see how she reacts, so how do you think she will respond when she finally gets the news of Fred’s death?

It depends on what she finds out. If she just finds out he’s dead, if she thinks Gilead did it, I think she will be somewhat relieved. But at the same time, obviously, that’s complicated, because she once loved this man and maybe a part of her still does. And they had a very beautiful relationship at one time.

But the biggest thing that I keep thinking about is, if she finds out that June was the one that orchestrated this, that’s terrifying. That’s probably the most terrifying thing that Serena Joy could find out, because when she gets her way and is actually able to be released from detention and start a new life in Canada with her baby, she would just be living in absolute fear the entire time. She knows if June is capable of that when she’s enraged, then she’s definitely capable of doing something to her baby. 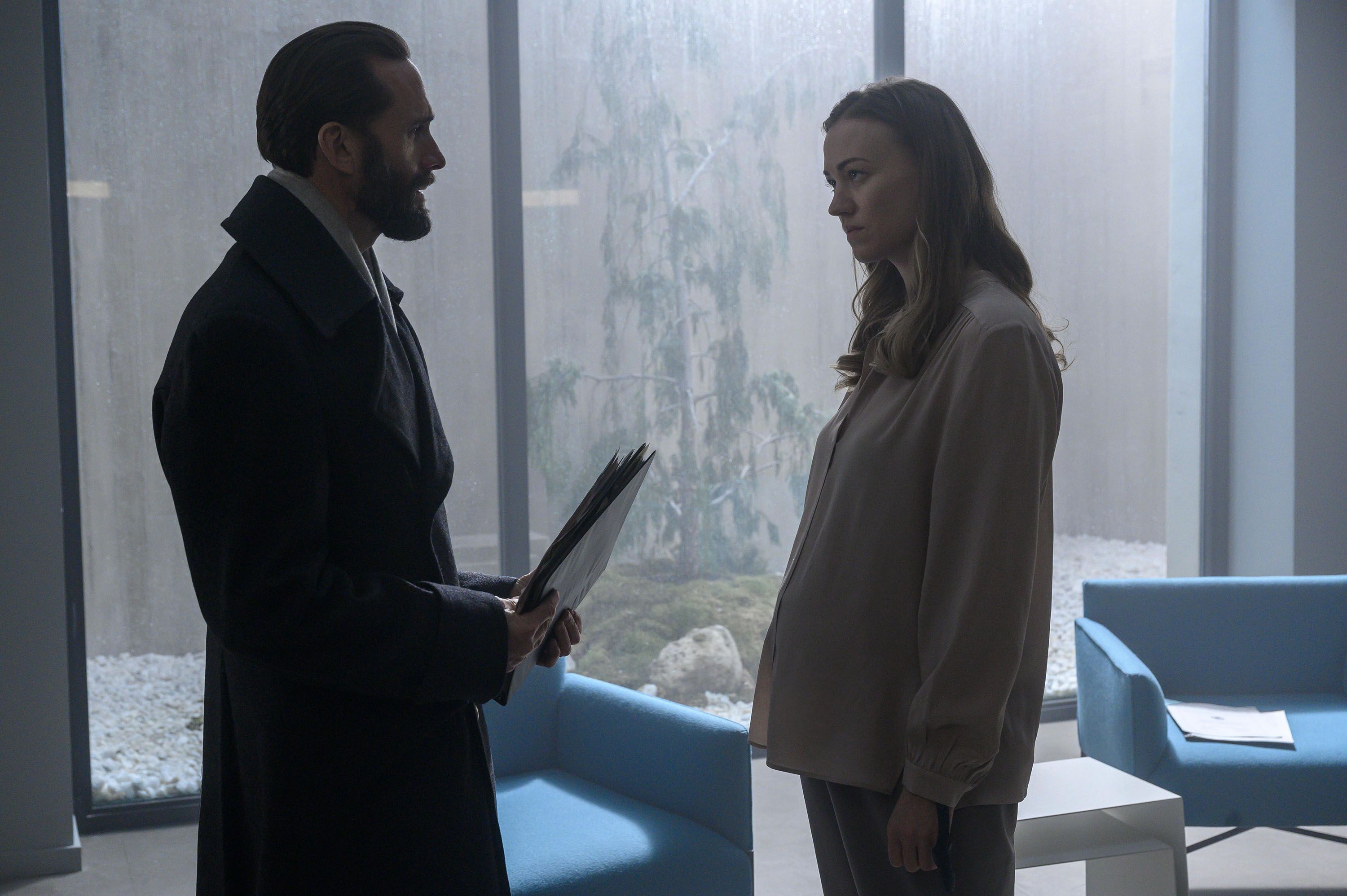 Do you think the severed finger makes it to Serena?

It’s interesting that they didn’t show Serena receiving it, or news of it, ’cause obviously in reality, maybe a severed finger would never make it to Serena having been processed in the mailing room first. But I think they’re kind of leaving their options open about exactly how Serena is going to find out, because obviously that’s a really huge moment. I think it’s in the details of how much does she find out. To me, again, the biggest thing is it was June’s plan.

As you mentioned, Fred and Serena have had a very long and convoluted relationship, and at one point, maybe it was beautiful. What stage was their relationship at this season, as she found out she was pregnant, they were put in custody, and June gave her testimony?

I think this was the season where Serena had the least time for Fred. She has just been so hurt and burned by him so many times. I mean, she was ready to give him over to the Canadian government and sacrifice herself, too, at the same time. That says a lot, and I think the further betrayal just nailed that coffin for Serena.

At first, she didn’t think she needed him, but when she realized that she probably still does need him a little bit, for whatever reason, then she decided on this business transaction kind of relationship with him. It was purely just strategy, at that point. And even more so when they left the detention center that one day and realized that people were outside cheering for them. They had a fan club of some kind outside, and I think she just put that in her back pocket and thought, “Oh, I can use this to my advantage later at some point, and just play along with this transaction right now just to get what I want.”

In addition to the strategy and advantages, just in the world of Gilead, Serena has long been defined as a wife or a partner, or only in relation to her marriage. Who is Serena, really, without Fred?

I think she is an incredibly powerful woman. I could see her becoming the leader of a political party or something, and gaining a following and gaining a lot of traction. We see that happen in the real world. I actually think that would be the most kind of realistic outcome for her and the next season. I don’t know what they’re doing next season, but in my mind, I can definitely see that happening. I think she’s been flirting with the idea of freedom in Season 4, and she knows it’s close, and she knows that she has a big chance to start this new life in Canada. I think she’s excited to pick up that pen again and start writing, and be her own architect of her own life now. 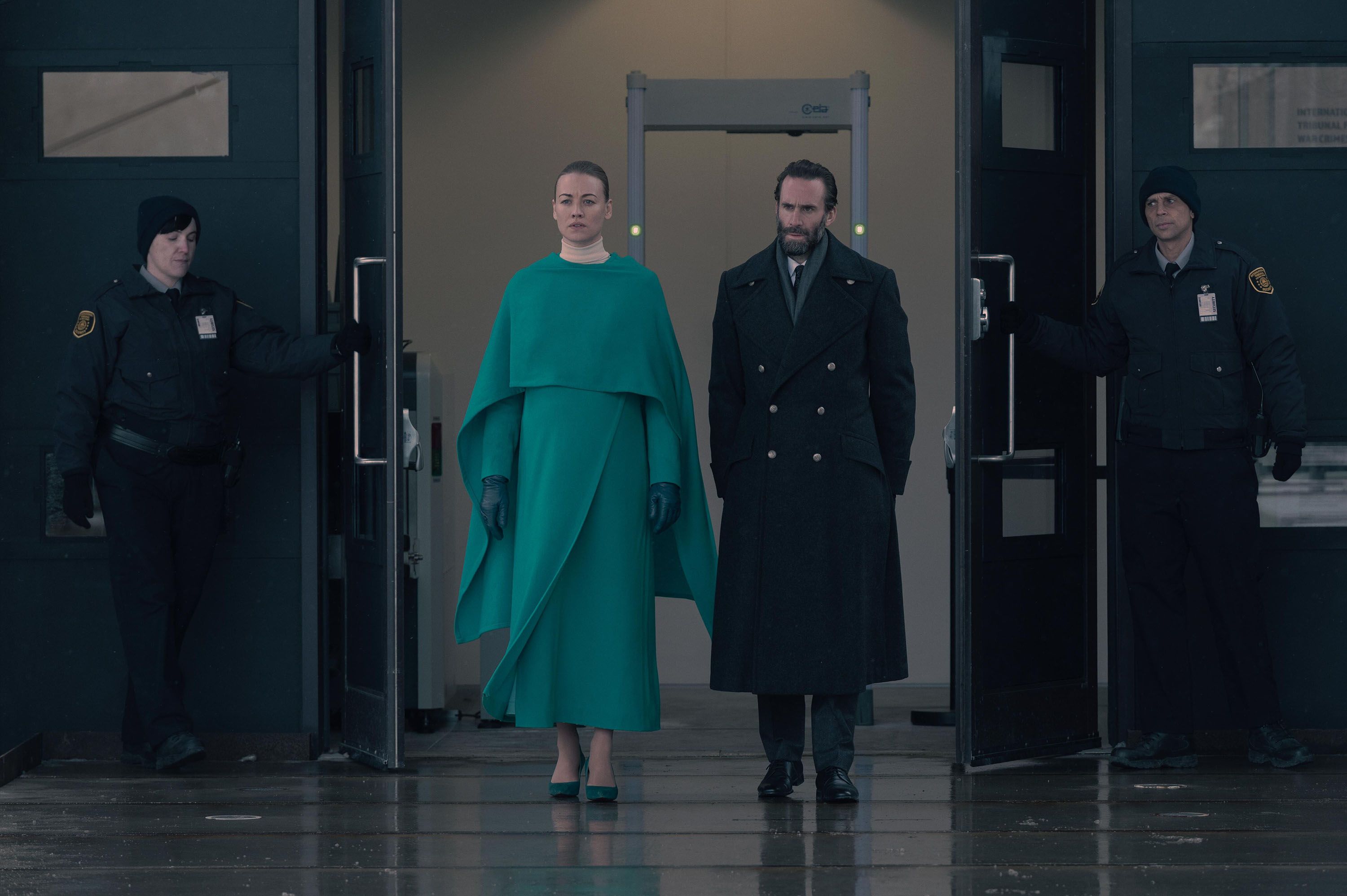 For you as an actor, what would it be like without Joseph Fiennes as a scene partner?

Well, it was very sad. In our last scene, I was upset. We’ve spent four years together, and despite the nasty on-screen relationship, he is really truly the nicest guy. I imagine they might bring him back for perhaps some flashbacks, but who knows? I guess it depends on Joe, whether he wants to come back.

I couldn’t help but laugh a little bit when Fred and Serena are saying goodbye and talking about calling each other on Zoom. Was that a last-minute, pandemic-inspired decision to throw that in?

No, it was in there. It was there from the time when I read the script. I think it was definitely coming from the writers’ room at an early stage.

An interesting theory that bubbled up this season was that Mark Tuello could have been the father of Serena’s baby. I saw that showrunner Bruce Miller shut this down, but did you see that circulating online? How did you react to it?

I’ve definitely had other journalists suggest that. I mean, I’m glad to hear you say Bruce shut it down. I was gonna say, unless they’re going to surprise me with something next year, and be like, “Oh, actually, um, it’s Mark’s.”

I also was under the impression it was Fred’s, because Fred and Serena had that intimate night together, that last night they spent before she handed him over to the Canadian government, unbeknownst to him. So I think that’s obviously when it would have happened. 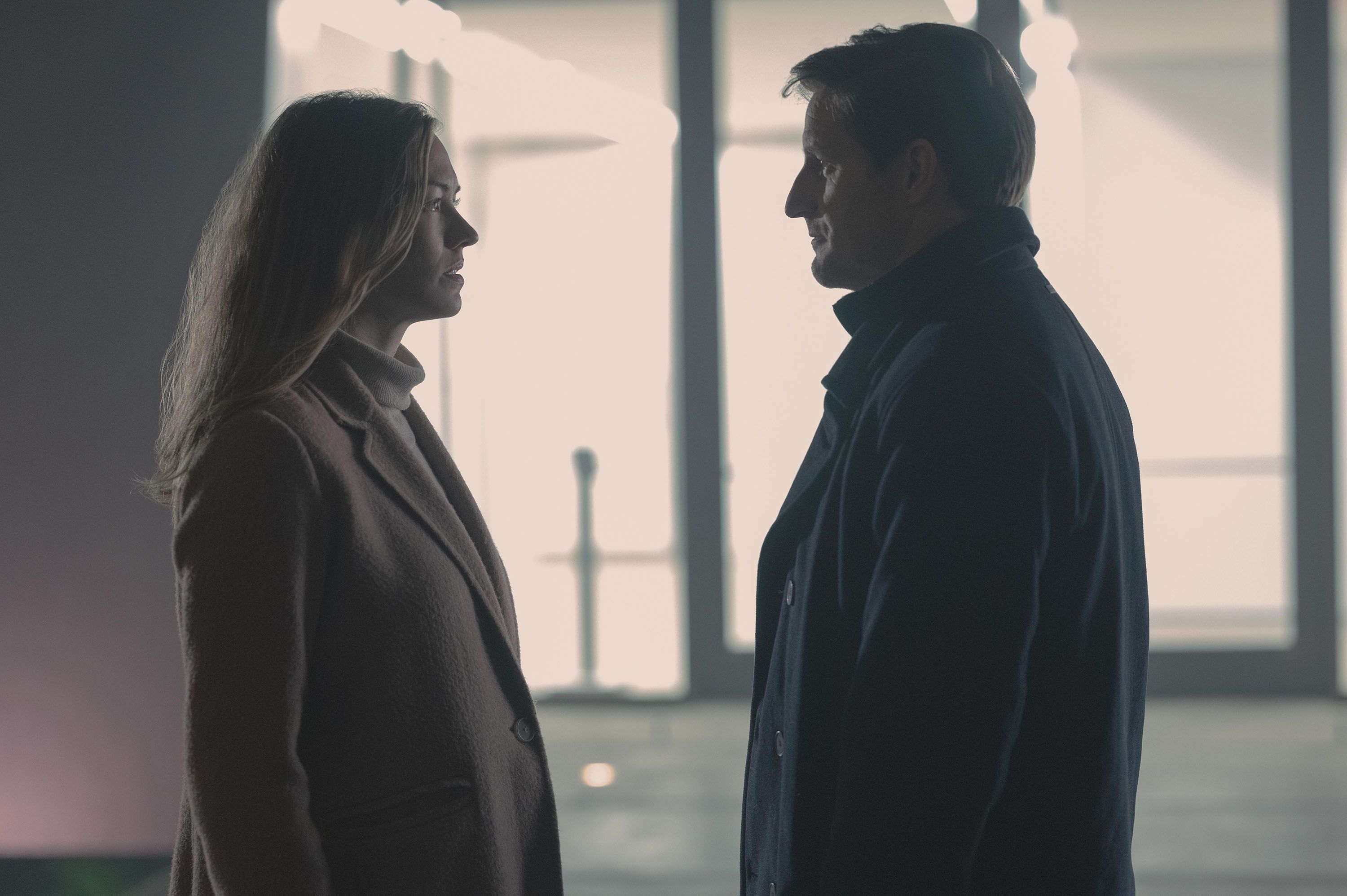 How would you describe her relationship with Mark? He is kind of orbiting their lives and learning everything about them. What kind of dynamic does he have with Serena?

They have a really unique … I mean, I would call it a flirtatious dynamic, even though that’s maybe a stretch. It’s flirtatious, but again, [all] strategy, because I think he has an ulterior motive and so does Serena. And they use that dynamic to each other’s advantage to get what they want. Mark Tuello obviously wants to get information and just set her and Fred up a certain way so that the Canadian government is getting the most out of each of them for whatever they can offer. And I think Serena’s just trying to use him to get out of the detention center.

But I also think she’s thinking about life after the detention center. If she’s out in the real world, she’s kind of utilizing this weird, flirtatious aspect to suck him in a little bit, into her world. And I think it’s working to some extent, because whatever dynamic they have, I don’t think it’s going to be over if she gets out. I think she would definitely try to use him in the outside world and keep manipulating him.

Where do you think Serena could go from here? Have you started discussing any details about where her story next season could go? Are the wheels already turning?

The wheels are turning in my head; I don’t know what the writers have decided. Typically, I’d meet up with them and see where their heads are at. I have no idea what they’re going to come up with, but to me, the most obvious thing that would be pretty fun to play out would be if Serena did get sent back to Gilead and become a handmaid because she’s now a fertile woman, and how she would handle that, especially if it’s a particularly abusive situation and it echoes June’s journey, or not.

There are obviously so many avenues to explore, but I feel like that’s such an obvious one that they would never choose to do that. It makes more sense to me to do the more infuriating thing—infuriating to the fans—and that she actually finds success outside of the detention center in Canada in the way of politics or becoming some kind of spokeswoman, picking up where she left off pre-Gilead: writing a book, getting a following, becoming the female president of Canada, I don’t know. [Laughs.]

This interview has been edited and condensed for clarity.